Copycat Panera Baked Potato Soup – The easiest baked potato soup ever! Diced russets potatoes are simmered in the best seasonings and spices with bacon in a rich cream sauce topped with green onions, more bacon, and shredded cheese! It’s everything you want in a baked potato soup, it’s rich, creamy and easy! Better than the original!

I love going to lunch or even to dinner at Panera Bread. They always have the best sandwiches (I’m not the biggest sandwich person at all, but they are good) and the best soups. If you haven’t already noticed, I have fallen in love with their soups because one of my most popular recipes on this site is my Copycat Panera Chicken and Wild Rice Soup! Their baked potato soup is another one of my favorites!

I may be a little biased here and say this Panera Baked Potato Soup is even better. Yes, I just said that, and I’m going to tell you why shortly. So this isn’t any potato soup, trust me on this. I have made so many over the years including The Best Potato Soup, One Pot Creamy Sausage and Potato Soup, and Creamy Broccoli Potato Soup. Each is unique and delicious in their way; there is no comparison. 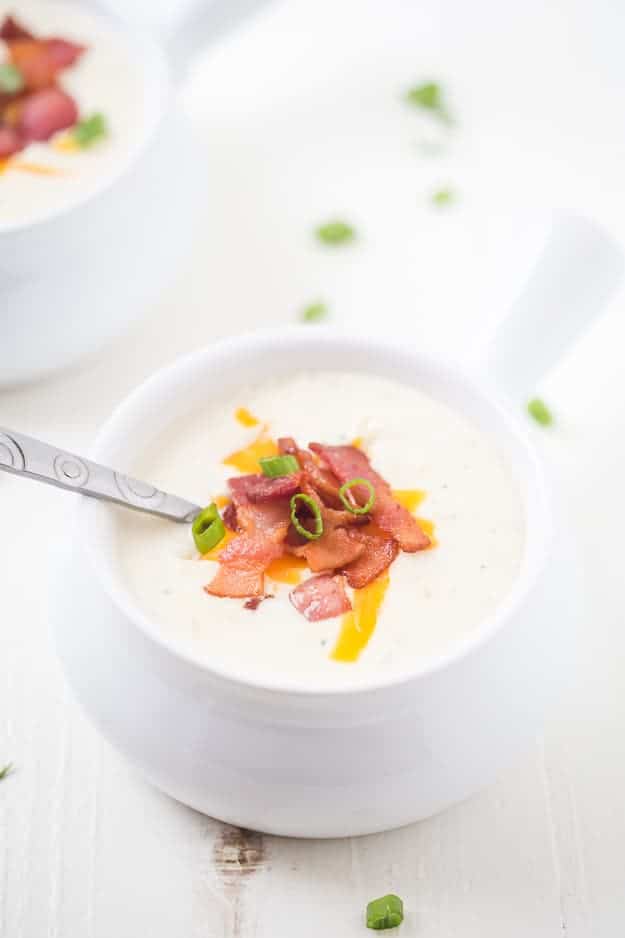 I was officially up to the challenge to make the perfect Copycat Panera Baked Potato Soup. It wasn’t easy, and I had to test the recipe three times before I knew it was perfect and maybe EVEN BETTER than the original. The first time I went browsing on Panera’s website to see what the main ingredients were in the soup, after that I went to my store and purchased them and then got to work.

If you are looking for a great soup pot to make this in, I highly recommend my favorite dutch oven!

Instead of using regular full-fat or fat-free cream cheese, I used Neufchatel cream cheese. The major different in the two cream cheese is Neufchatel is made exclusively with milk, and regular cream cheese is made with milk and cream. Both are delicious, but I wanted to stick to the same ingredients listed on their website. The first time I tested this Panera Baked Potato Soup I used the full 8 ounce package of Neufchatel, but I then realized the taste was off. I’m not complaining because we at least had MANY bowls of this soup and each was delicious.

So let’s chat about the things I change to make this soup even better than the original. I omitted the chives because I thought the green onions gave it enough flavor and chives were expensive at my store. I couldn’t justify the cost of them because we never use chives, or at least my husband doesn’t and it’s hard for me to go through the entire container without it going bad. You won’t miss the difference. I used russet potatoes even though the ingredient list on their website calls for potatoes. In soups I like russets because they hold up their shape great while being simmer in liquid. I also mashed my potatoes once they were tender. So in other words, I left half of the diced and the other half I mashed until the consistency looked perfect. 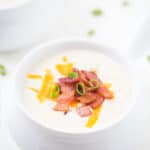 Copycat Panera Baked Potato Soup - The easiest baked potato soup ever! Diced russets potatoes are simmered in the best seasonings and spices with bacon in a rich cream sauce topped with green onions, more bacon, and shredded cheese! It's everything you want in a baked potato soup. It's rich; it's creamy and easy! Better than the original!

Hi there, I'm Chelsea! Welcome to my little kitchen on the internet. Here I create easy, delicious, family-friendly recipes. in life I believe that good food is meant to be shared, and I can't wait to share all my favorites with you! More about me →